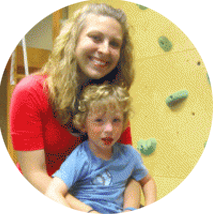 Struggling with sensory processing disorder, Blake could only attend to activities or tasks for a few minutes at a time. As early as April, he was unable to tolerate excessive noise, being wet or participate in family outings without having a meltdown.

In his occupational therapy sessions, his therapists have worked to regulate his sensory system by using a weighted vest, increasing heavy work and incorporating a picture schedule. Although these strategies made a small difference, he was still unable to stay engaged for longer than 5-7 minutes.

Recently, his therapists decided to introduce the Wilbarger Brushing Protocol, which includes brushing a child’s arms, legs and back with a specially designed brush. They began implementing the protocol at the beginning of each of Blake’s OT sessions and also educated his parents on this protocol to allow for brushing at home. Blake has now been participating in the Wilbarger Brushing Protocol for about six weeks.He is showing significant progress, not only during therapy sessions, but also within his home environment. Blake now begins each therapy session with brushing and wears a weighted compression vest.

He is able to remain engaged in activities for longer periods of time including playing games at the table for up to 20 minutes. Blake’s mother reports he is now able to go to baseball games with his family without being overly bothered by the excessive noise. She also said Blake enjoyed playing in the wave pool (and even getting splashed) during their family vacation!