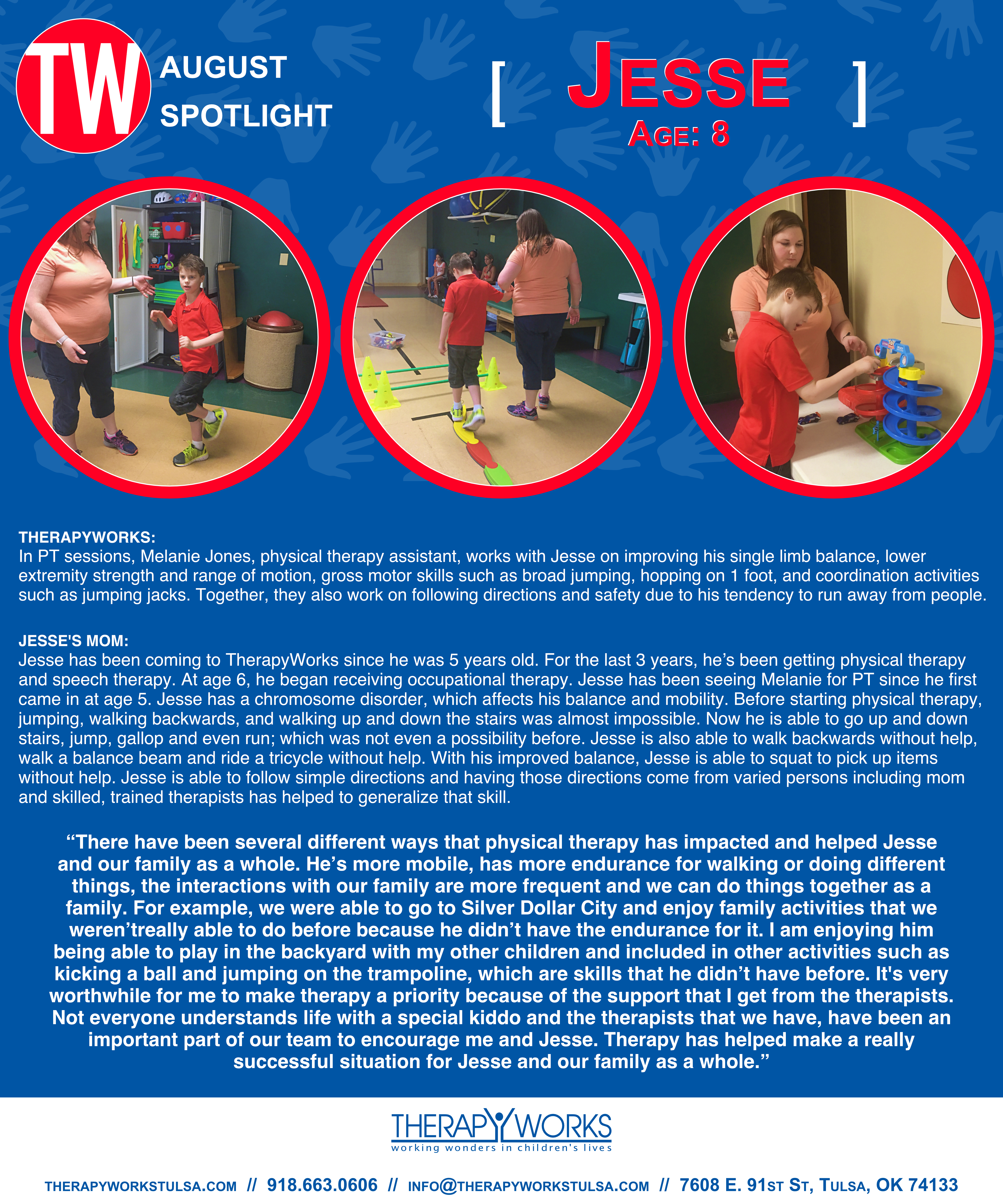 In PT sessions, Melanie Jones, physical therapy assistant, works with Jesse on improving his single limb balance, lower extremity strength and range of motion, gross motor skills such as broad jumping, hopping on 1 foot, and coordination activities such as jumping jacks. Together, they also work on following directions and safety due to his tendency to run away from people.

Jesse has been coming to TherapyWorks since he was 5 years old. For the last 3 years, he’s been getting physical therapy and speech therapy. At age 6, he began receiving occupational therapy. Jesse has been seeing Melanie for PT since he first came in at age 5. Jesse has a chromosome disorder, which affects his balance and mobility. Before starting physical therapy, jumping, walking backwards, and walking up and down the stairs was almost impossible. Now he is able to go up and down stairs, jump, gallop and even run; which was not even a possibility before. Jesse is also able to walk backwards without help, walk a balance beam and ride a tricycle without help. With his improved balance, Jesse is able to squat to pick up items without help. Jesse is able to follow simple directions and having those directions come from varied persons including mom and skilled, trained therapists has helped to generalize that skill.

“There have been several different ways that physical therapy has impacted and helped Jesse and our family as a whole. He’s more mobile, has more endurance for walking or doing different things, the interactions with our family are more frequent and we can do things together as a family. For example, we were able to go to Silver Dollar City and enjoy family activities that we weren’treally able to do before because he didn’t have the endurance for it. I am enjoying him being able to play in the backyard with my other children and included in other activities such as kicking a ball and jumping on the trampoline, which are skills that he didn’t have before. It’s very worthwhile for me to make therapy a priority because of the support that I get from the therapists. Not everyone understands life with a special kiddo and the therapists that we have, have been an important part of our team to encourage me and Jesse. Therapy has helped make a really successful situation for Jesse and our family as a whole.”